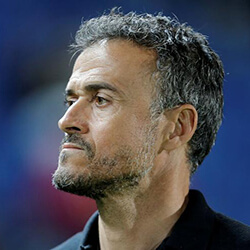 Spain manager Luis Enrique will be stepping down from his position for personal reasons and will be replaced by Robert Moreno less than a year after signing up. The former Barcelona manager signed a two year contract last year in July, but has been absent for most of march due to a family matter that he deemed “of an urgent nature” according to the Spanish Football Federation.

The 49 year old took over the position following their exit from the 2018 World Cup during the last 16 rounds. Talking about Enrique leaving, president of the Spanish Football Federation Luis Rubiales told reporters that it was a decision that Enrique took and one that they are grateful for. He continued, saying that they have the perfect memory of him, and that it was a personal decision that doesn’t depend on the team, and that they think it’s best, adding that they are convinced that the best response is the most prepared team, which will be represented by Moreno in the future.

On a statement that was added to the RFEF website, Enrique thanked his staff at the federation for the faith that they have shown him and his situation. The manager has travelled home to attend family matters before Spain’s victory in Malta, where Moreno took charge of the team temporarily. Under Moreno’s guidance, Spain has won their last three games, and will be taking on Romania for their next Euro 2020 qualifier match.