Neymar Fails To Arrive For Training 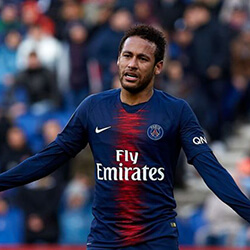 Paris St Germain has stated that they will be taking appropriate action against Brazil striker Neymar after the player failed to arrive for the first day of pre-season testing. The 27-year-old striker was expected back at the club’s training ground, but ultimately didn’t make an appearance. The forward has been linked with making a move back to his former club Barcelona.

A statement released from Paris St Germain said that that the club notes that Neymar Jr did not attend at the agreed place and time, and that this was not done with the club’s prior authorisation. They added that the club regrets the situations.

An interview with la Parisien, PSG’s director Leonardo stated that Neymar could leave PSG if there is an offer that suits everything involved, and that contact from Barcelona had been very superficial. He continued, stating that to date, they don’t know if anyone would buy it or at what price, and that the PSG wants to rely on players who are able to stay with the club and work toward a bigger future.

Neymar joined the club from Barcelona for a world record of 222 million Euros in April of 2017. He has since scored 34 goals from 37 league appearances that has helped the team earn successive Ligue 1 titles, but has also been part of a number of disciplinary actions, which includes a short ban after lashing out at a fan at the French Cup.