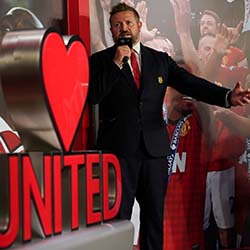 The most powerful man in British sports seems likely to be newly appointed at the helm of Manchester United in the form of Richard Arnold.

Arnold’s appointment now seems likely to be announced as early as next month – with Ed Woodward set to step down as chief executive of the club at the end of 2021.

The change in management comes at an exciting time of desperately needed optimism as Old Trafford prepares to welcome back the legendary Cristiano Ronaldo. The stepping down of Woodward had been necessitated by a time of crisis marked by much drama surrounding the European Super League (ESL) earlier this year.

Fan protests in April sparked the withdrawal from the ESL of at least six English sides – with the most damaging and pronounced coming from fans at Old Trafford. Fans have voiced immense mistrust in the owners of the club, namely the Glazer family, ever since they first took over ownership of the club back in 2005.

The family shortly after the ESL fiasco pledged to launch a new, fan-focused, share ownership scheme at Old Trafford, with discussions currently aiming towards an agreed plan by no later than the beginning of the new season.

Arnold, meanwhile, who is the club’s current group managing director, has reportedly been competing for the job of CEO alongside two other current Man-U executives. A former executive at Nasdaq-listed tech giant InterVoice, Arnold was previously the club’s commercial director.

Woodward has been with the club since 2005.