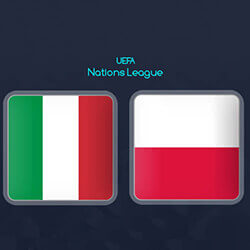 The inaugural League A game of the first ever UEFA Nations League will see Italy battling it out against Poland. The UEFA Nations League, which is the first of its kind, was created with the hopes of providing promotion and relegation in a time when previous pre-season matches were played as friendly games. The hope is also to provide qualification to the 2019 Euro Championships.

Talking to the coaches for the teams, Italian coach, Roberto Mancini told reporters that they came into the UEFA Nations League with the belief that they will do well. Their first objective is to try and work together as a team. He added that although Poland didn’t do well in the World Cup, they have a strong team, and that Italy’s mix of experienced and new players will hopefully prove enough to take Poland on.

Polish coach, Jerzy Brzeczek will be playing his first game in his time as coach of the Poland team. He explained in a statement that they are looking forward to their match against Italy, and that both teams have strong line-ups. He added that the UEFA Nations League is a good test, especially as Poland performed poorly in the World Cup, and Italy didn’t qualify, and will give both teams another chance.