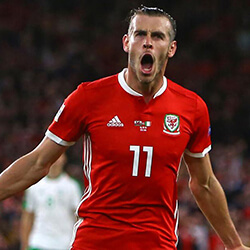 The UEFA Nations League has made big waves in the international football scene, especially considering it’s the first year that the tournament is taking place. Put in place by UEFA, the Nations League is a way for European teams to compete on a more professional level, allowing them to pull away from the friendly matches that took place previously. The Nations League also allows teams the chance to find a place in the 2019 European Championships.

The latest winners in their Nations League opener was Wales, who bested the Republic of Ireland 4-1. Ryan Giggs, former Manchester United player, lead his team to a spectacular win against Ireland as Gareth Bale netted a stunning goal that pushed them into the league.

Tom Lawrence saw the first goal for the team after just six minutes, allowing Wales to push out ahead as he collected a pass from Joe Allen.

Bale followed suit after he earned another point for his team with an amazing long-distance score, and Aaron Ramsey pushed the score to 3-0 just before the half-time break. Connor Roberts added on more point to the total for Wales, while Shaun Williams managed to push up Ireland’s score to 1 during the 66th minute.

The team, lead by Ryan Giggs, are now set to move on to battle it out with Denmark in the next Nations League tie match. In League B, the Czech Republic lost to the Ukraine, 1-2.