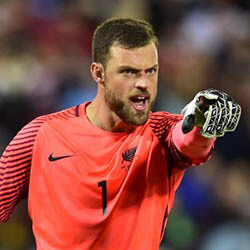 Wellington Phoenix goalkeeper Stefan Marinovic, one of the team’s top performers of last season, has been left grounded for fourteen more days in Adelaide, South Australia, by a new outbreak of infections at Peppers Waymouth Hotel. Marinovic was spending time in isolation at the facility at the time of the outbreak.

Marinovic was already halfway through a 14-day managed isolation stay at the Adelaide facility when guests in residency were informed of a cluster-outbreak at the hotel. The latest outbreak means the New Zealand international will now have to spend an additional fourteen days isolated in Adelaide, and that subsequently, Wellington Phoenix will have to other option but to continue preparing for the new A-League season without their champion goalkeeper. The new upcoming new season gets underway on December 27.

Marinovic is in the process of returning to Australia following his participation in Germany’s A-League offseason. His absence leaves the club with only a single reserve-goalkeeper to fall back on.