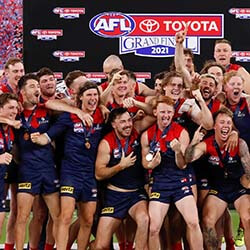 Melbourne coach Simon Goodwin says the Demons’ first AFL Grand final win in 57 years isn’t the end of anything, but rather the beginning of many more great things to come.

The Demons on Saturday night made for a thrilling grand final at the Optus Stadium in Perth by making a stunning comeback after having fallen 19 points behind the Western Bulldogs. Their comeback eventually saw them triumph over their opponents by a stunning 74 points.

While Goodwin was full of praise his midfield, which on Saturday played a deciding role in the side’s first flag since 1964, he however added that talent alone wasn’t going to ensure the side stayed in the position they’re currently in. He said reaching where they are now hadn’t been easy, and holding on to that position was going to be even harder.

Playing through a twice-torn hamstring on Saturday had been star Demons defender Steven May. After the 29-year-old tore his right hamstring against Geelong in the preliminary final, he informed his club’s medical team not to tell him the result for fear it might affect his performance in the series decider. As such, the decision was taken for him to continue working on his fitness on the track.

This created a huge risk for the Demons for choosing May to compete in the grand final, but despite a re-injury during the second quarter of the game, it all worked out well for team and player in the end.