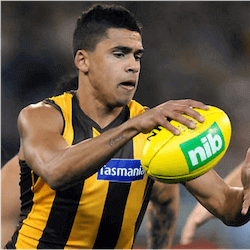 Camp Hawks has been plagued by injuries – mainly knee injuries – all year long, and this has yet to let up.  Both Ben Stratten and Grant Birchall have been ruled out of Saturday’s game as a result of injuries – and what’s worse, Stratten will be out of it for the rest of the season.

Fellow Hawks Cyril Rioli and Jaeger O’Meara have also been crippled by similar injuries.  The Hawks are particularly eager to get O’Meara back into play – whose immediate playing future has been put on hold as a result of a new knee injury in a long line of previous injuries.  By the time that O’Meara had joined the Hawks at the end of last season, he had not played a senior game for two entire seasons – all as a result of surgeries to the knee.

Stratten’s exclusion seemed unlikely at first – after having been out of play for 5 weeks due to a bone bruising injury in his knee, the assumption was that all was well once more.  However, the penny truly dropped on game day against Collingwood, when Stratten woke up to a badly swollen joint.  This was probably triggered by training the previous day.

The Hawks are bound to be happy to return to the University of Tasmania Stadium on the weekend when they will be battling it out against the Giants.  Having won 20 out of the 22 games played at this venue, since 2012, Tasmania seems to be a good omen.

The Giants have however won the last two clashes between the sides, putting the Hawks at a possible psychological disadvantage for the game set to take place on the weekend.  The Giants hold the advantage as far as the clearances are concerned – beating the Hawks by miles.  In fact, the Giants are currently in pole position with clearances – averaging at 41.9, as opposed to the Hawks’ 35.3 average score.

The Hawks will most likely have to win at least six of their last eight games in order to make it into September, and eventually a chance to play in the finals.  Player Blake Hardwick seemed confident that this was likely, as opposed to being a mere possibility.  He went on to say that it was certainly a more pleasurable experience returning to the Club daily after a win – and that the mood in camp Hawks was generally a happy one.