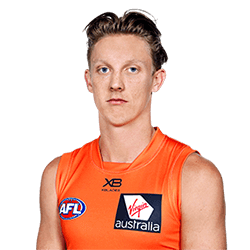 Lachie Whitfield, of Greater Western Sydney, has seen a new level of success in his career in the AFL thanks to a new position within The Giants, and the player couldn’t be more thrilled.

The No. 1 draft pick of 2012 has played in 90 games so far in his career, which took place over the last five seasons, where he maintained his role as wingman. 2018 has seen new success for the wingman, forever, thanks to some good luck and impeccable timing.

The Giants have recently lost two of their best attacking defenders when Nathan Wilson moved back to Perth toward the end of last season, and Zac Williams suffered an Achilles injury that has seen him sidelined since.

Head Coach Leon Cameron required a replacement for the two vacant positions, and ultimately decided that Whitfield would be the perfect choice. The 20-year-old wingman has played 20 games so far this season, and has averaged a career high of 27.4 possessions at 78 per cent efficiency. He’s currently ranked No. 1 in the AFK for uncontested possessions, as well as 7th for kicks overall.

The player started this year’s season on a high, and has so far averaged 25.1 touches in his first ten games, but has increased that average to 29.7 in the latest ten games. Over the last ten, he has also maintained 30 disposals for five games, and just above 25 for the other five games, seeing unprecedented success thus far.