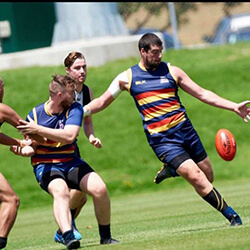 After a friend encouraged him to give Australian Rules Football a try to improve his game fitness, former Lincoln Club Senior Rugby player Kris Wilder, 27, played five games for the Christchurch University Cougars. Then he got selected for the New Zealand AFL draft in November!

Wilder says that the games he played for the Cougars obviously warranted his getting on the draft radar, and although it cost NZ$600 to enter, selection meant that 10 weeks of flights to Auckland, ice-baths, kit, meals, and warm-ups would be covered. He said that the best way to describe the set-up is as a professional one, much like the Mitre 10 Cup Rugby division.

Wilder says, however, that going professional is a very risky venture, not just for him but for most players from New Zealand. He said that his current goal is simply to make the Academy team by the end of the season because by that time an Australian team will be here on tour and he would like to see how he fares against them.

He described the difference between AFL players from Australia and New Zealand as massive, saying that the Aussies make short work of the Kiwis for the most part. He added that, at this point, it is not about the money for him, and that he plans to keep playing Senior Rugby, bringing up his total games for the Lincoln Premier team to 100.

Wilder said that he’s already gone a lot further than he ever dreamed possible and that his main goal is still to just be a better, fitter, Rugby player.