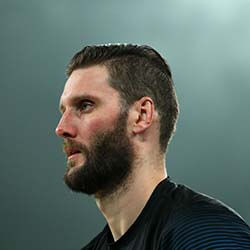 Former Tall Blacks centre Alex Pledger says he’ll fight his recently revealed cancer diagnoses with everything he’s got. Pledger has been diagnosed with colorectal cancer and confirmed via a media statement that he is currently in hospital to undergo radiation treatment.

Pledger also shared a basic timeline of his diagnoses via a media release by the Sharks, confirming that after having felt unwell for several months, and following several medical assessments with doctors in New Zealand, his tests still came back inconclusive. The star centre was eventually diagnosed late last week after specialists determined the nature of his cancer following his admission to hospital resulting from general illness.

The champion basketballer and Southlands Sharks centre, dubbed Chief because of his standing 2.13 metres tall, is however determined to beat his illness. He 33-year-old says confirms in the press statement that he’s happy with the plan of action doctors have worked out for him and that despite the initial shock in response to the cancer diagnoses, he’s feeling very good about his prospects.

The Sharks have in the meantime added a message of support of their own, saying that the team, along with the rest of the basketball community, has moved quickly to support “Chief”, his fiancée Bailee, and their family. The team statement furthermore confirms that Pledger will remain part of the Sharks’ playing roster for 2021.

Pledger has been an integral member of the Tall Blacks since 2008, having contributed to many of their finest achievements in the international arena.