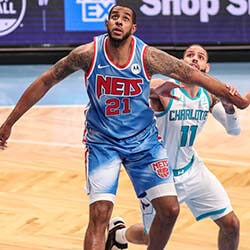 NBA star and Brooklyn Nets cornerstone player LaMarcus Alridge on Thursday announced his retirement from career sport. According to the top player, he suffered from an irregular heart-rate during his last game with the Nets, and that this was one of the scariest moments he had ever experienced.

Alridge issued a formal statement announcing his lamentable decision to retire from the NBA, saying that for the first time in 15 years he had decided to put his own health ahead of his basketball career.

Alridge, a seven-time All Star champion, first signed with Brooklyn on March 28. He soon after joining the team became their starting centre and will undoubtedly be sorely missed. The Nets have however wished him well, and according to Kiwi team GM Sean Marks, fully support his decision given the potentially dangerous circumstances surrounding his health.

Alridge was reportedly first diagnosed with Wolff-Parkinson-White Syndrome as a youngster rookie in 2007. The syndrome is known to cause heartbeat abnormalities and particularly a rapid heartrate. The star NBA player says he feels much better now that he’s had the most recent incident checked out but that he’s nevertheless decided to call time on his career for health and safety reasons.

Aldridge joined the Nets earlier this year after he concluded a buy-out deal with the San Antonio Spurs. He lived a game among games with his new franchise with a best-in-five in the one just prior to his heartrate incident. He scored 22 points against the New Orleans Pelicans on April 7.