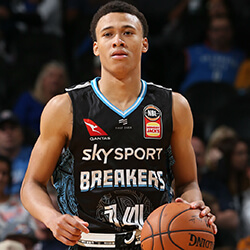 RJ Hampton, the guard for the New Zealand Breakers, is leaving to start preparations for the NBA draft which commences on the 25th of June 2020. His time with the club is over, and he won’t be seeing what remains of the season. Instead, He’ll be heading home to the United States.

Hampton became a member of the Breakers’ squad as part of the NBL Next Stars initiative, which was created to allow future stars of the league to start playing earlier on in the league. LaMelo Ball, Illawarra Hawks guard, and Didi Lozada from the Sydney Kings have also been able to join the league thanks to this programme.

While Ball was injured earlier on in the season and went back to America in January, Hampton has been attending to a hip issue in the past couple of weeks. He said that the organisation thought it would be best for him to return home now since he’s not healthy enough to play in New Zealand. He’s going home to get healthy for the NBA draft.

Although the injury is a short-term one, with just two games left in the Breakers’ regular season the clock was ticking to get Hampton back out onto the court. He averaged 9 points, 4 rebounds, and 2 assists in 20 minutes per game with the Breakers and improved noticeably as the season unfolded. And while some fans were critical of the time he was given in the game over the season, Hampton never expected to see full starter’s minutes, because, he says, his primary goal was to learn, not play.