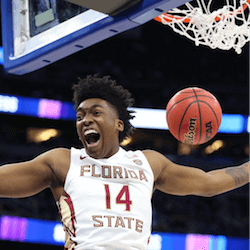 Florida State junior Terance Mann has said that all credit belongs to his mother, following having earned Honourable Mention honours as an esteemed member of the All-ACC Men’s Basketball team. The conference office made the announcement just ahead of the Annual ACC Tournament, which is said to commence on March the 6th at the Barclays Centre in Brooklyn, New York.

Terance Mann enters the 2018 ACC Tournament season as the Seminoles’ overall leader both in scoring as well as in rebounding. Mann is now officially one of only three players to lead his team in both the scoring as well as the rebounding categories whilst heading into the post-season.

Mann is ranked in 22nd position in the ACC in scoring and rebounding, and is one of only 9 players ranked among the top 25 positions as far as the combined categories are concerned.

The Figures Speak For Themselves

It all happened in Florida State’s win over Georgia Tech on January 24th, when Mann scored an absolute career high of 30 points. Not to mention his career high of no less than 14 rebounds when his team played against Oklahoma City in the Orange Bowl Classic on December 16th. As it currently stands, Mann is now Florida State’s leader in everything from field goals (153 field goals made) to offensive rebounds (59) to total rebounds (164 total rebounds made).

Mann has racked it up in double figures on more than one occasion, 21 times to be exact.  What’s more, he has scored more than 20 points at least seven times, a feat that is quite scarce in the world of professional men’s basketball.

For Duke, it was Marvin Bagley who walked away with the honours. Bagley was named the ACC Player and Rookie of the year. This is only the second time ever that the same player as won both awards at the nation’s top basketball conference and its truly a special achievement.

The other player to have been awarded with this special honour was also a Duke player, Jahlil Okafor. Okafor was awarded the double-honour in 2015.

Bagley and Okafor are the only two players to have been awarded both honours in the 65 year history of ACC.