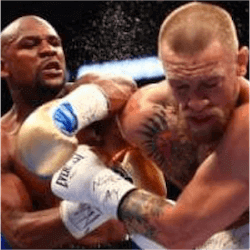 A Lot To Look Forward To

2017 is shaping up to be a great year for boxing – despite concerns that the sport has lost its appeal.  The role that the Money Fight has played in the build-up of excitement and renewal of passion for the sport cannot be denied – whatever your opinion of either of the two fighters, before or after the August 26 fight.

After all, McGregor and Mayweather did manage to put on a surprisingly good fight – many having expected the Irishman and MMA fighter to not last even a fraction as long as he did.

Essentially a rematch following a previous fight in March of this year, due to the controversial nature of the fight’s results, the September 9 fight between Srisaket Sor Rungvisai and Roman Gonzalez is set to take place at the StubHub Center in Carson, California.  Promotions Managing Director for the Center, Tom Loeffler, said that four years have lapsed since their promotion of the Gennady Golovkin vs. Marco Antonio Rubio fight – a stand-off that turned out to be one for the history books, smashing the stadium’s boxing attendance record.  The September 9 fight is expected to be a repeat of the Gennady / Rubio fight in all the ways that matter.

Speaking of the devil – Gennady Golovkin is set to take on Saul “Canelo” Alvarez at the T-Mobile Arena in Las Vegas in September 16.  The proposed fight comes at a significant risk for Alvarez, being very near the summit of his professional career.

Bookies are favouring Gennady Golovkin on this one – and rightfully so.  This is not so much a lack of confidence in the abilities of Alvarez as what it is a realistic expectation of Golovkin’s capabilities.  Golovkin, originally from Kazakhstan, is the holder of no less than eighteen title defences in the middleweight division.

Britain’s Hughie Fury has promised to put on a show for fans in Manchester as he takes on Joseph Parker in bid for the World Heavyweight Title on September 23rd.  The fight will be one of the first mainstream acts to be hosted by the Manchester Area since the terrorist attacks in May of this year.  Hughie Fury is originally from Manchester and the upcoming fight is bound to be a moving occasion for the Brit.