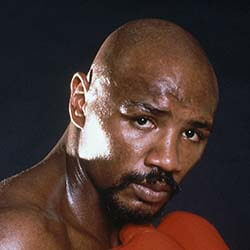 All-time boxing great and hard-hitting American “Marvelous” Marvin Hagler has died, aged only 66. Hagler’s wife, Kay Hagler, announced the news of his “unexpected” passing on social media on Friday. He died at the couple’s home in New Hampshire.

Hagler racked up an impressive 62 wins, two draws, and three defeats, from a total of 67 contests fought during his illustrious career. He held the middleweight championship title between 1980 and 1987, during that time making a record 12 successful title defenses. He was also twice named the “Fighter of the Year” by The Ring magazine – in 1983 and 1985.

The legendary fighter’s standoff with Thomas Hearns in Las Vegas in 1985 is to this day considered one of the greatest fights of all time. Despite sustaining a massive gash to his forehead, which very nearly led the referee to call early time on the fight only moments earlier, Hagler eventually delivered a super third-round KO to his opponent.

Bob Arum on Saturday responded to the news of the legendary boxer’s passing, saying he had been one of the greatest athletes ever promoted by Top Rank. Arum described Hagler to have been a man of honour, and a fighter of unequalled determination to win.

Hagler was known in boxing circles for his “iron chin” and unstoppable power inside the ring. He scored a phenomenal 52 knockouts during his 14 years as a professional fighter. He eventually retired from professional boxing in 1987, and at the time said he had felt fortunate to leave the ring with his faculties and good health intact.

The boxing legend is survived by his wife and five children.