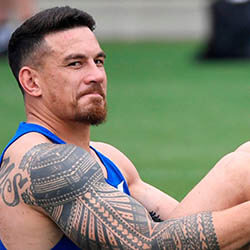 Former Cronulla Sharks star Paul Gallen says he’s given up hoping for a Sonny Bill Williams clash in the ring.

Gallen does however have a fight against former UFC star Mark Hunt to look forward to. And while Hunt may not have nearly the prominence or pulling power of Williams, he may just be able to trip Gallen up in his first boxing loss.

Gallen will without a doubt have the voice of Williams warning him against underestimating Hunt still ringing in his ears when the pair enter the ring of a six-round heavyweight clash at Bankwest Stadium on December 16.

Hunt, on the other hand, has been a great deal more confidently outspoken about the upcoming fight. The former K1 kickboxing world champion probably has good reason to be feeling positive about the upcoming fight – he’s the overwhelming favourite with the New Zealand TAB, after all. Even at 46, Hunt remains Gallen’s toughest competition by quite a margin. That, coupled with the fact that he’s obviously about to enter the fight on a cloud of confidence, may prove the undoing of Gallen yet.

The Gallen-Hunt fight will be the co-main event together with Kiwi welterweight Bowyn Morgan’s upcoming fight against Australian boxing prodigy Tim Tszyu –  a fighter unbeaten through 16 professional career fights. Tszyu is obviously the favourite to win that particular fight – and pegged at $1.07 vs. Morgan’s $7.50 allocated by the TAB.

Tim Tszyu is the son of boxing legend and Hall of Famer Kostya Tszyu.