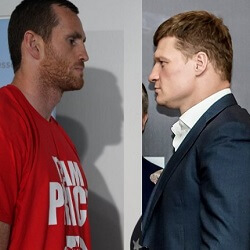 The World Boxing Association, WBA, Intercontinental Championship and the World Boxing Organisation, WBO, Heavyweight titles will both be up for grabs this month as British boxer David Price takes on Russian fighter Alexander Povetkin. This fight brings together two of the biggest names in heavyweight boxing, and the contest is sure to be incredibly entertaining.

Povetkin is entering the ring with a record of 1 loss to 33 wins, and he is also an Olympic Gold medalist. These two facts are proof of the talent Povetkin possesses and what he will be showing in the ring during the bout. The Russian is the current holder of both belts, and is no doubt more than determined to ensure that he doesn’t lose, since there is so much at stake for the former Olympic champ.

David Price no doubt knows exactly what he is up against. He is going to have to start well, since Povetkin will be looking to hit hard, pressuring Price early on. Price is a very organised boxer, and he will need to bring all his skill to this fight, defending well in order to avoid being knocked out early on. He should have the full support of the fans at the fight, being the hometown hero, but that is not necessarily enough to see him beat Povetkin.

It is by and large being predicted that Povetkin is going to take this fight -the Russian is a better boxer, and seems to be in far better condition than Price as well.