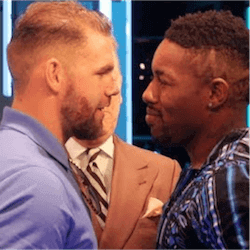 Billy Joe Saunders will be making a second defence of his WBO middleweight title at London’s Copper Box Arena come September 16th – this time against Willie Monroe Jr.  Saunders, who hasn’t been in the boxing ring with an opponent since December of last year, has described the inactivity as being a stressful time.

Apart from the obvious pitfalls associated with a lack of being competitively challenged for a prolonged period of time, Billy Joe Saunders has also been fighting the fat monster – this according to trainer Dominic Ingle.

Ingle has been making the best of whipping Billy Joe Saunders back into shape over the last three months at the family-owned Wincobank Gym in Sheffield in preparation for the Willie Monroe Jr fight.  This after a cry for help regarding Saunders’ overall health from promoter Frank Warren.  Ingle responded immediately, even going as far as moving Saunders into a house opposite from his own and keeping the middleweight world champion to a strict 9:30pm curfew.

Ingle seems confident that the unbeaten champion is now ready and able to take on Willie Monroe Jr on Saturday, after having passed a very strict exercise regime and fat camp.

Hatfield’s Saunders defeated Irish champion Andy Lee in December 2015, taking the WBO title strap after a very tight fight.  Saunders floored Lee twice during the third round of the fight, earning a favourable majority decision from the judges.

2016 rolled around and proved to be a year mired with frustration as a result of a series on ongoing injuries.  December of 2016 finally saw Saunders back into the ring, when he successfully defended the title against Artur Akavov in Glasgow.  Following the Glasgow fight, Saunders was scheduled to take on Avtandil Khurtsidze but the stand-off was stopped short before it could even begin as a result of Khurtsidze having been arrested before he could face Saunders in the ring.

Of the September 16th fight against Willie Monroe Jr, Saunders has said that Willie was a tough man to beat, being a good fighter and boxer, but that he was sure that he would have the mental edge over his opponent.

Promoter Frank Warren is notably excited ahead of Saturday’s fight, saying that Monroe would have to bring his best game in order to beat Saunders and that the winner of the September 16 fight would effectively become the final piece to complete the jigsaw puzzle that is middleweight.