Boxing: Four to Watch on Saturday 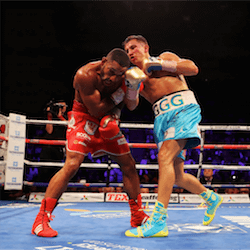 Briedis, undefeated in 22 fights with 18 KOs, is odds-on at most betting sites to win, at $0.25 and below, with Perez at $3.00 and up. The winner will go through to the WBSS cruiserweight semi-final against Ukraine’s Oleksandr Usyk, who beat German Marco Huck with a TKO in Round 10 of their quarter-final.

There’s more Saturday night boxing in Liverpool, with Paul Butler fighting Stuart Hall in the main event at the Echo Arena. The two Brits are fierce rivals. Butler, who has won all but one of his 25 professional fights, 13 of them by KO, beat Hall in their one previous encounter, in Newcastle in June 2014, to take the IBF World bantamweight title.

Hall, who at 37 is nine years older than his opponent, has a record of 28: 21-5-2, with 7 KOs. Saturday’s fight is an eliminator, with the winner getting a shot at the WBA World bantamweight championship. Butler is heavily odds-on, at $0.20 or less, to win.

The undercard at the Echo Stadium also has some action that will interest punters. In another Brit vs Brit match-up, Sean Dodd, the lightweight Commonwealth and WBC International belt-holder, fights Tom Stalker for the Commonwealth title. Both men are 33, with Dodd on a record of 17: 14-2-1 (5 KO) and Stalker on 17: 12-2-3 (2 KO). With a marginally better record, Dodd is at around $0.55 in outright betting, with Stalker at $1.50.

The other undercard bout worth a punt is the third all-Brit affair: Liverpudlian Tom Farrell against Londoner Ohara Davies. The two will be fighting for the WBA International super-lightweight title, currently held by 27-year-old Farrell.

Farrell is undefeated after 13 professional fights, while Davies comes to the match fresh from his July loss against Josh Taylor; his first in 16 bouts. Nevertheless, 25-year-old Davies is the betting favourite, at $0.20 or less, with Farrell at $3.00 or more.