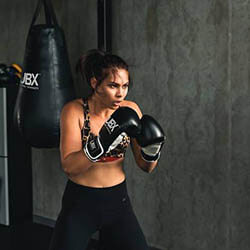 Security measures like keeping their equipment spotlessly clean and totally separated and minimising contact between people are being undertaken as Gyms offering Martial Arts and Boxing reopen under Alert Level 2.

Palmerston North’s Snapback Boxing, which counts children and vulnerable youth among its clientele, is one of the many gyms opening its doors once more as Alert Level 2 kicks in, and its Directors, Charmaine and Filipo Saua, have been hard at work doing the necessary preparations.

Charmaine stated that their doors reopening is vital because of the type of children they work with, so she and her partner have made absolutely sure all safety requirements are being met. She described their attitude as doing whatever it takes to get the children back in. Filipo stated that many of the kids they see are referred to them by the MidCentral District Health Board, and that, out of the total of 60 young boxers, roughly 20 are in the programme for troubled youth.

Across town, Tasha Chambers of the Fight Shop NZ let it be known that their gym would be operating under similar restrictions as well. Chambers stated that she and her team are sorting out what needs to be done because there’s quite a lot of conflicting information.