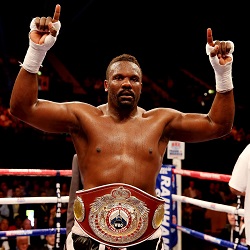 Lucas Browne, the Australian Heavyweight contender known as Big Daddy, has joined forces with the former European Heavyweight Champion Dereck Chisora, or Del Boy, as Browne prepares for his grudge match with Dillian Whyte. The fight is set to take place on the 24th of March 2018.

Chisora, who lost in a vehemently disputed decision to Whyte in December of 2016, provided guidance on how Browne can get the better of Whyte when their upcoming WBC Silver title fight at the O2 Arena in London takes place.

Chisora is a Gentleman

Browne stated that Chisora was an absolute gentleman, and their session was a good, hard workout. He added that it was exactly what he, Browne, needed, and said that they had discussed Whyte and what the fighter brought to the ring.

Rodney Williams, Browne’s trainer, also chimed in, confirming that the pair had had an excellent sparring session, and that this was precisely what Browne needed at this stage of his preparations. Williams said that Chisora was an incredibly humble man, and that he and his trainer, Don Charles, had been very accommodating, and very welcoming.

Chisora went a little further in his welcoming, and invited Browne to his farm for some sprint work around the race track he has there. Browne accepted, and stated that he would be sparring some more with Chisora, and then focussing on sharpening up and getting himself ready to put Whyte down!