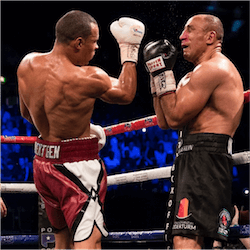 British boxer Chris Eubank Jr might have been odds-on at online sports betting sites to win his World Boxing Super Series quarterfinal against Avni Yildirim in Stuttgart, but he was not the crowd favourite. Although born in Turkey, Yildirim is based in Germany as a fighter, so he was considered the homeboy in the Hanns Martin Schleyer Halle.

And German punters with long memories will also remember Chris Eubank Sr’s performance in Berlin 23 years ago, when British boxing’s then-bad boy put an end to Graciano Rocchigianni’s streak of 35 fights undefeated. It was Eubank Sr’s ninth defence of his WBO Super Middleweight belt, and he beat the much-loved Italian over 12 rounds in a brilliant display, to the bitter disappointment of the German crowd.

A Chance to Silence Critics

So Eubank Jr had the 1994 sins of the father to be visited on his head in Stuttgart, although that’s unlikely to worry him. The 28-year-old has lost just one of 26 bouts in his pro career: his 19th fight in London on 9 November 2014, which was awarded to Billy Joe Saunders on a split decision.

The former two-division champion has put 19 opponents down by knockout in his 25 wins. He’s got all the motivation he needs: he’s already had to beat Arthur Abraham to qualify for the WBSS Super Middleweight quarter-finals, and another win against Yildirim should silence any remaining detractors.

Which isn’t to say that the 26-year-old Turk was a complete long shot. He’s undefeated in 16 fights, 10 of them by KO, he’s tough as teak, and he throws explosive punches. He still has a way to go to prove himself in the international arena, but he’s well set up to punish any hint of complacency in his British opponent.

The winner goes through to the WBSS Super Middleweight semi-finals, to be scheduled later in the year. This is only the second fight in the bracket, with Callum Smith through to the semis after his win against Erik Skoglund in Liverpool last month. The victor in the Eubank Jr v Yildirim fight will face either George Groves or Jamie Cox, who fight their WBSS quarter-final at Wembley Arena next Saturday.