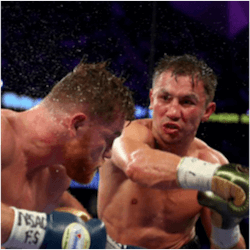 Gennady Golovkin has retained his middleweight title with a controversial draw against challenger Canelo Alvarez on Saturday night. An extremely skewed set of judge’s scores completely overshadowed what was actually a brilliant display of boxing at the middleweight showdown in Las Vegas. Played out at maximum speed, the two fighters showed incredible stamina, desire and heart, leaving it all out in the ring for the judges to miss completely.

Sticking to their own game plans, the two boxers did well on the basics with neither one backing down. Both had their moments and now it seems, they will most likely have to do it all over again. A rematch might just favour Canelo. As awesome as Golovkin was, there were clear signs of him slowing down and this match alone would have taken something out of the 35-year-old.

The decision on the night should have gone to Golovkin over Canelo. This was the opinion of almost everyone in the audience, any watching at home or just about anywhere in the world. Golovkin managed to keep his belt, but the scoring was downright silly. With the scores at 115-114, 114-114 and 118-110, the total ineptitude of the judges was unforgivable at an event worth US$100 million. It was just four years ago that judge CJ Ross was struck off when she scored the Mayweather-Canelo fight a draw. No doubt, Byrd will be following the same course.

Popular news agencies had the scores set as Golovkin winning 8-4 in rounds or at minimum 7-5. In fact, there were really only two rounds that were close. What is going to happen now is that the two will do it all over again. Speaking to the press after the fight, Golovkin said that his focus was on the belts and he is still the champion. The fact that the fight was a draw was not his fault.

Alvarez said that although he had trouble with Golovkin’s power, he was prepared for it. He felt that he won at least 8 rounds and should have won the fight. That being said, he is happy to set up a second fight. He reiterated the point that Golovkin didn’t win, it as a draw. He ended off by saying that he is always going to be a step of him. If it comes down to a second fight, he will be the victorious one.