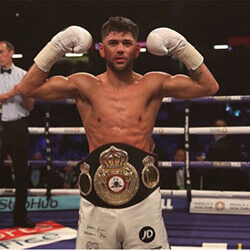 Cordina told reporters after the event that it was a good learning experience for him, but that he was aware that he had the fitness to go for 12 rounds if necessary. The boxer also explained that he felt comfortable during the match, and that he never doubted himself, especially after his many hours of hard training. He said that boxing for a Commonwealth title in his hometown added fuel to his fire, and that they will wait to see how things play out after the end of summer.

Dodd, a former Commonwealth champion and two-time British title challenger represented a suitable challenge for Cordina, as well as a step up in class. It was also the longest fight of the Welshman’s career as he stood up against the experienced 34-year-old fighter.

Despite a cautious start made by Cordina, and fighting hard against an imposing Dodd, the Welsh boxer’s quick hand speed allowed him to tally up enough points to put him ahead and earn the title.