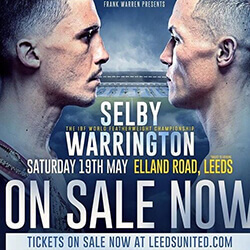 Josh Warrington is going to be led out on stage by former captain of Leeds, Lucas Radebe as he heads out to go face-to-face against opponent Lee Selby for the International Boxing Federation featherweight title.

Warrington, who is the mandatory challenger for the crown and a proud citizen of Yorkshire, has been set as the chairmen of the Leeds United Supporters’ Club. “There’s no extra pressure. If I had been able to visualise the perfect scenario for my first world title challenge, I would have pictured it like this. With the band and a Leeds United legend leading me out makes it a special occasion in the boxing world,” Warrington told reporters.”

The British boxer is undefeated in 26 fights and has retained his title as featherweight champion. His opponent, Selby, also known as the “Welsh Mayweather” is no easy match, and is back for the fifth time to defend his IBF crown.

Warrington continued, “I’m a massive underdog so I don’t feel there is pressure. This is the biggest show he has boxed on, there’s not often a stadium fight and it’s been a while since Lee topped a show. There will be a lot more attention, a lot more focus. I can’t say how he’s going to react. Some fighters are undone by the atmosphere.”

Selby, in his career of 27 contests, has only been defeated once, much earlier in his career. He maintains that the Yorkshire battle will not affect his performance in the match.