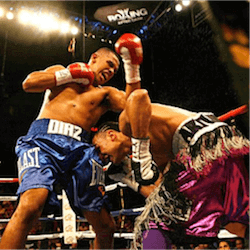 It would seem that the circus that is the McGregor – Mayweather press conference has had some alternative use yet:  former Boxing World Champion Paulie Malignaggie has said that after experiencing Connor McGregor’s levels of confidence first-hand, he now believed that the Irishman could in fact end up sticking it to Floyd Mayweather on August 26.

Having previously given the Irish underdog no benefit of the doubt, Malignaggie seems to have done a one-eighty after closely following the widely publicised conference shenanigans.  He was quoted as saying that at first he thought that McGregor had to be well aware of the fact that he was going to lose the fight, but after watching him perform at the press conferences, he began to notice something in the character of the Irishman – something that convinced him that McGregor was going to win the fight – as ridiculous as that may have sounded to anyone listening in.

According to Malignaggie, it was all a matter of having beaten the odds for so long, that McGregor would most probably continue beating the odds in future as well – as it was now a part of his character and what he believed to be true about himself.

Malignaggie also revealed that he had now become so emotionally invested in McGregor, that he would soon be heading to Las Vegas to offer his assistance to the Irishman as chief sparring partner.  Paulie Malignaggie is no stranger to boxing or winning – being a former WBA and IBF World Champion.

Malignaggie conceded that it would be presumptuous to simply say that Conor McGregor was going to win the fight – but that he believed that McGregor would be taking advantage of key moments of opportunity during the fight that may very well lead to winning the fight.

The real question was whether McGregor could make good use of those opportunities and turn them into bigger moments, and ultimately pose a real danger to Floyd Mayweather’s chances.

He also went on to say that whatever the outcome, McGregor would walk away from the fight having etched a positive opinion into the minds of fans and spectators.  Of the increasingly less likeable Mayweather – the only way that Mayweather would be able to do the same, was if he totally annihilated McGregor, something that wasn’t a very likely thing to happen.

The press conference did more for promoting the fight than to serve as any form of boost for Mayweather’s overall likeability.