Mayweather & McGregor At It In Toronto 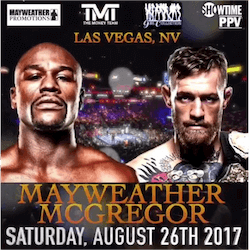 Controversial Run Up to McGregor/Mayweather Fight

Floyd Mayweather and Conor McGregor were at it again at last night’s press conference in Toronto, Canada.  The duo assailed the ears of fans with colourful profanities and even swung the insult bat at match event organisers, Showtime.

Ever since the announcement was made that the long anticipated stand-off between Mayweather and McGregor was all systems go, McGregor has been hampering on the fact that Mayweather allegedly owes the US Government millions of dollars in unpaid taxes.  Mayweather, never one to shy away from waving around wads of cash in public arena’s, seemed eager to downplay all comments of this nature up until now and could not have been too happy to be met by a crowd of thousands of Canadians chanting, “Pay your taxes!” at Wednesday’s press conference.

Mayweather owes the IRS an estimated $22 million in taxes from the 2015 tax year.  It clearly aggravated the as of yet undefeated Boxing World Champion to the point of frothing at the mouth when, whilst waving a $100 million check at McGregor, the Irishman told him to give it to the tax man.

The crowd obviously didn’t warm up to the fact that Mayweather wasn’t paying his dues, and booed him when he bragged about wearing the Canadian maple leaf on his Money Team attire.

McGregor was clearly the crowd’s favourite at Wednesday’s conference in Toronto.  Surprisingly so, as one would have thought that the unpleasant vibe caused by what was perceived as racial slurs uttered by him during the first press conference in Los Angeles, would have stuck.

McGregor sparked absolute outrage at the opening press conference by taunting Mayweather with, “Dance for me, boy!” when Mayweather moved away from the lectern to show off his famed footwork by shadow-boxing.  The outrage was most likely exacerbated by the fact that this wasn’t the first time that McGregor had stepped over this particular line, having previously offended Nate Diaz by referring to Mexicans as “Cholo”, ahead of their first fight.

Mayweather Snr. attempted to play down the racial card and allegations made by key sports commentators by saying that he did not see how the remark related to racism, and that this was a boxing match and as such had nothing to do with race.

Floyd Mayweather will face Conor McGregor on August 26, in what many believe will be the fight of the century.