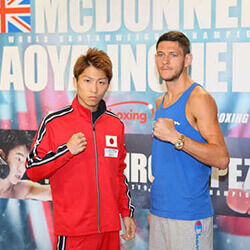 As the fight between Jamie McDonnell and Naoya Inoue winds up, Inoue has sent a warning out to McDonnell, telling that he needs to expect a crushing loss. His plan is to end McDonnell’s world title with a single punch during the fight.

The match, which sees the Japanese fighter going up against McDonnell for the title of WBA bantamweight champion, is set to be one of the best of the season, and has had the two challengers make various threats against each other in the last few weeks.

Inoue has since told reporters, “European fighters have long legs and arms, and it means that their body positioning is different from Asian fighters. It isn’t easy to find those kind of fighters in Asia. I didn’t have any difficult fighting them, but it was a new experience. It’s the first time that I’m going to face a fighter that tall. But it’s the same when meeting any fighter for the first time, there’s always something new to contend with.”

So far Inoue has found nothing but success after fighting his way through the light-flyweight and super-flyweight titles previously. His aim now is the world champion belt in a third-weight division, making his match against McDonnell vital.

If he manages to beat McDonnell, Inoue will have a chance to enter the World Boxing Super Series, which puts him on course against other world champions such as Ryan Burnett, Zolani Tete, and Emmanuel Rodriguez.