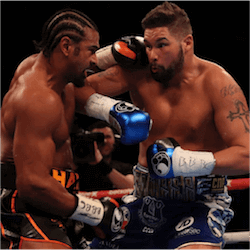 First it was golf’s Dustin Johnson; now Londoner David Haye has joined the American, to make it two high-profile sports stars who have picked up an injury falling down a flight of stairs in 2017. Perhaps start using the lifts, chaps?

Haye’s injury, the result of losing his footing on a stairwell during training and grabbing a balustrade to stop himself falling headlong, in the process tearing a bicep, came at a severely inopportune moment. The British boxer was due to fight fellow Brit Tony Bellew on December 17 in London’s O2 Arena, and the bout had to be postponed.

The latest good news for boxing fans is that a new date has been set: the two will fight on Saturday, May 5, 2018. The venue remains unchanged.

The fight is a grudge rematch that fans and punters have been anticipating eagerly since March this year. The first Tony Bellew v David Haye fight was also at the O2 Arena, on March 3. At the time, the two were closely matched on career records, although Haye, with 28 wins from 30 bouts, had been fighting in the heavyweight division since 2009.

Liverpool’s Bellew, despite racking up 28 wins from 31 bouts in the light-heavyweight and cruiserweight divisions, was appearing in his first heavyweight fight. The aggro on display at prefight press conferences got physical, keeping fans in both camps well hyped for an epic display.

Which is what they got: both fighters giving as good as they got and the upper hand seesawing back and forth, until Haye injured his ankle falling in the sixth round. From then on, Bellew dominated, finally knocking Haye down for a TKO in the 11th.

While online sports betting fans will be keen to take a punt on the Tony Bellew v David Haye rematch, May is still several months away. And as more than one critic has scoffed, Haye does seem remarkably injury prone.

Jibes from rivals like Tyson Fury on social media make much of the fact that you can only guarantee a Haye fight once he’s actually in the ring; hopefully, he’ll keep himself undamaged until May 5.