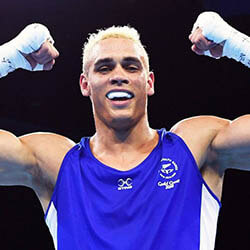 The goal that David Nyika has held close to his heart for many years now has finally been achieved. The Heavyweight hitter from Hamilton has just qualified for the upcoming Tokyo Olympic Games and is the first male boxer from New Zealand to do so in the last 16 years. It’s been a tough journey, but he made it.

The two-time Commonwealth Games Gold Medalist failed to qualify for the Rio Olympics four years ago after dealing with judging decisions deemed highly controversial. It was a devastating setback, but he soldiered on.

This time around, he and nine other boxers from New Zealand were forced to reschedule plans after the Qualifying Tournament for the Asia Oceania contingent underwent a move at very late notice. The venue was changed from Wuhan in China to Amman in Jordan after the global outbreak of the COVID-19 coronavirus. The Kiwi team then hit another bump after a coronavirus scare popped up while they were training in Italy.

Nyika, however, managed a first-round bye in the 91kg category thanks to his second-ranking for the tournament, which saw his pushed straight through to the Quarterfinals. Here faced a make-or-break fight versus Alaa Aldin Ghousoon from Syria on which his Olympic dream depended.

Over the past four years, Nyika’s grandfather died, he endured a split from Rick Ellis, his long-time coach, and put on 10kgs to move up a weight division. The boxer called this past period an emotional, mental, and physical rollercoaster but is glad he’s made it through.