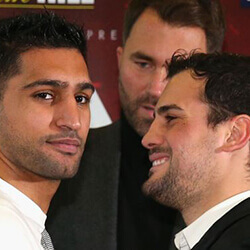 The future will have an incredible match between two well-known British rivals, Khan and Brook. At least, that is if Khan can win his match on Saturday. Lo Greco, however, does not intend on letting this happen. He has stated that he intends on spoiling those plans, and stealing the Kell Brook match from Khan. In a bold interview with Sky Sports, Le Greco announced that he intends on spoiling the party.

That alone would have been a confident, if cocky statement. But Le Greco wasn’t done yet. He went on to talk about how he can’t wait to meet Eddie Hearn, the decision maker on fighting events. Aware that it was Hearn who had Khan arranged to fight Brook, Le Greco declared that Hearn is a ‘smart guy,’ and that upon him beating Khan, Hearn would surely allow him to fight Brook, instead of Khan.

The trash talking got smiles and laughs from journalists attended the press conference, but Le Greco apparently wasn’t done. He had more trash talking yet.

Lo Greco went on to further run down Khan, saying that the man was looking for a way out of fighting Brook. He questioned why Khan had reduced his weight class, as opposed to increasing it for the Brook fight.

Bold, confident words from a man who has not had a fight in two years, after suffering a knockout. One can only hope that Lo Greco delivers in the ring after delivering shovel loads of trash talk to the press.