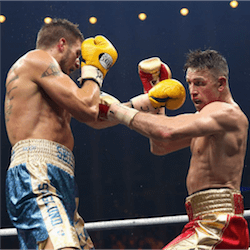 It wasn’t pretty; in fact, it was bloody and scrappy, but Callum Smith did enough to beat Sweden’s Erik Skoglund in their super-middleweight World Boxing Super Series 2017-18 quarter-final on Saturday night. The youngest of four boxing brothers, undefeated Smith was the odds-on favourite in front of his home crowd in Liverpool.

Skoglund, although not particularly well known in Britain, also went into Saturday’s bout without a blemish on his 26-fight career. Despite online sports betting sites pricing him at an unlikely $14.00, the Swede proved no pushover. Still, he can’t complain about the final score after 12 rounds, unlike Gennady Golovkin, who many feel was robbed by the controversial draw awarded to Canelo Alvarez in another big fight on Saturday.

The judges in the Smith-Skogland bout scored it 116-112, 117-111 and 117-110 to Smith, which, although a fair scoring, doesn’t quite reflect how competitive Skogland proved to be. Smith dominated in the early rounds, but Skogland got going with a lethal jab, consistently delivered, that caused the Englishman some problems in the middle of the fight.

Smith in Full Command by 11th Round

Having weathered the storm, Smith came back in full force in the final rounds, eventually dropping the Swede in the 11th. Although Skoglund got up and stayed up till the end of the fight, there was no real dispute over who produced the better boxing. The victory takes the 27-year-old Scouser to a career record of 23: 23-0-0 (17KO).

Smith’s next WBSS fight will be in the semi-final, against the winner of the super-middleweight quarter-final between the USA’s Robert Brant and German Juergen Braehmer. Braehmer will have the home-crowd support in that QF, scheduled for 27 October in Schwerin, Germany.

The other super-middleweight SF will feature the winners of the two other QFs in the bracket. Stuttgart is the host city on 7 October, when Britain’s Chris Eubanks Jr meets Turkey’s Avni Yildirim, and Brit Jamie Cox fights his countryman George Groves in London on 14 October.