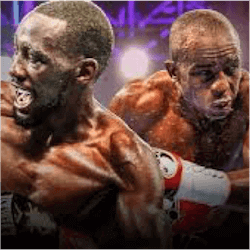 Undefeated Is The Word

Another big one approaches: Terence Crawford vs. Julius Indongo, in Nebraska.  Both men are undefeated champions.  This – the undefeated factor –  seems to be the making of real magic, as attested to by the absolute hype around the Mayweather/McGregor spectacle ahead of August 26.

“The Blue Machine” Indongo has a lot of gusto and pop behind his punch – more than would be expected if his 11-knock out record were considered as an isolated result.  In fact, he seems to be running on an unlimited supply of energy, and has been described as athletic to the point of being awkward, seemingly able to bounce around for what seems like an eternity.  Worn down does not seem to be part of his vocabulary – and it may be exactly this that will pose the biggest challenge to Crawford during Saturday’s fight.

Crawford is known to get buzzed quite easily and early on during a fight.  Not relying on pure trickery and brute strength in order to effect an early knock-out may prove fatal for Terence Crawford’s career.

This having been said, Crawford has proven masterful at making mid-fight strategy adjustments.  This is very often the make or break of any fight – or boxer’s career, for that matter.  Great boxers cycle through every possible plan and strategy until such time as they find their rival’s “soft” spot.  After that it’s simply a matter of taking care of business.

The secret to a victory will merely be a matter of lasting long enough to out-bounce his energetic rival.

The Makings Of A Machine

One cannot help to go back to the fight between Julius Indongo and Eduard Troyanovski, when trying to predict the outcome of the brawl.  Indongo entered into that fight as the absolute underdog – only to knock out Troyanovski during the maiden round.

The same applied to the stand-off with Ricky Burn.  Again, the underdog knocking out his rival and making it look deceptively easy.

Terence Crawford, however, will most definitely be looking to cement his reputation as being the most dominant fighter at his current weight – 140lbs.  Indongo would have to bring a flawless game to Saturday’s fight if he were to swing the outcome in his favour.

Whatever the final result, the fight will witness two men contending for the same prize: the right to be hailed as the undisputed champions in his division.