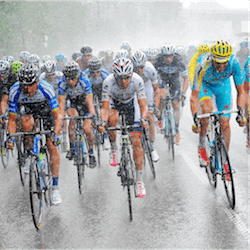 2017 Tour de France Proving to be a Wet Ride

Kiwi favourite George Bennett was off to a slippery start during the 1st Stage time trials of the 2017 Tour de France.  Having slid off his bike around a particularly treacherous corner, made even trickier by the damp conditions, Bennett ended up finishing in 162nd place – exactly 1 minute and 37 seconds behind the first man over the finish line – Geraint Thomas.

Bennett rode for Team LottoNL-Jumbo and despite being obviously disappointed, and having faced challenging circumstances, managed to complete the initial stage.

Bennett tweeted, “Well, not our best start with three of us Lotto boys on the deck.  It was slippier than Bill English out there.  20 days to go.”

Bennett has been earmarked as New Zealand’s best chance of a stage-victorious representative during the 2017 Tour de France.  The 27 year old rider claimed a smashing victory earlier this year at the Tour of California.  This awarded Bennett the title of having become the first New Zealander to win a World Tour event.

Bennett is a climber who has proven himself worthy of competing with the best in the world. As a result of this, he’s bound to be worthy contender during Stages 8 and 9 of this year’s Tour de France – despite his slippery start.

Patrick Bevin – competing for Team Cannondale-Drapac – is competing in his very first Tour de France this year.  He managed to impress during the Tour de Suisse with no less than 3 Top 10 stage finishes.  Bevin may be relatively new to the Tour, but that by no means disqualifies him as worthy contender on the hills and in the valleys of this year’s great battle on the roads.

Smith describes himself as a determined sprinter, and is of the opinion that the roaring hills of the Tour may be the obstacle that will place him a notch above the rest during the 2017 Tour de France.