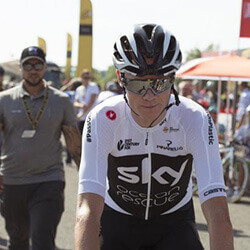 Chris Froome, four-time Tour de France champion, has been met with bitter and jeering crowd as he makes his way through the start of the pre-event at this year’s Tour de France.

Froome, along with Team Sky, were introduced to the crowds only to be met with a mixture of cheering, clapping, boos and whistles as they made their way past a clearly divided set of fans.

The reason for the mixed response from the audience is due to the UCI dropping doping charges against Froome, who had been caught using more than the allowed dosage of the asthma medication, salbutamol. Sky Team told reporters that they were expecting to face confrontation from Tour de France fans after the news of his entrance to the event, however.

The event in question was a pre-race that introduced the various riders and teams to the crowds before the start of the official race. Riders and their teams paraded through the streets of La Roche-sur-Yon as part of the build-up, which is where angry crowds were waiting for Froome.

The UCI decided to drop charges against UCI, following an investigation of nine months after the test results had been revealed. The charges were dropped partly due to the advisement of the World Anti-Doping Agency. The Amaury Sport Organisation, who officiate the Tour de France, made it known that they did not want Froome part of this year’s event. A number of riders, such as Bernard Hinault, called for protests against Froome.