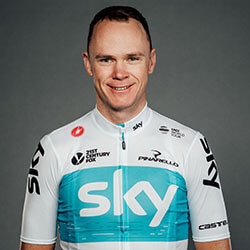 World-class cyclist Chris Froome intends to skip defending his Giro d’Italia title this year as him and Geraint Thomas say they will instead be turning their attention to the Tour de France.

33-year-old Froome is currently on course to become the fifth rider ever to win five Tours, while Team Sky teammate Thomas, who is 32, won the race for the first time in his career in 2018. 21-year-old Colombian Egan Beran will be leading Team Sky at the Giro, which is set to start in May this year.

Talking about his plans, Froome said that although he has some amazing memories from last year, he will keep the Tour de France as his main objective, and it is probably better that he skips the Giro altogether in 2019. He added that he is getting to a point in his career where he has to begin thinking of the legacy that he will be leaving behind, and that if he manages to claim a fifth victory at the Tour de France

The Giro, which is the first of three Grand Tours of the year, will be running throughout the month of may, with the Tour de France taking place a month later in June. Froome, who is a two-time bronze Olympic medallist will begin the season at the Tour Colombia before moving on to the UAE Tour, wand hopes to take place in the Tour de Yorkshire for the first time in his career.