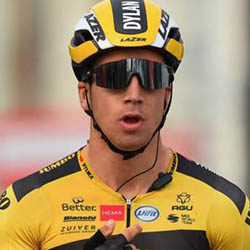 Dylan Groenewegen, the Dutch cyclist responsible for the Tour de Pologne horror crash that earlier this year left fellow countryman and contender Fabio Jakobsen fighting for his life and with severe injuries to his face and head, has been banned from racing for nine months. The four-time Tour de France stage-winner on August 5 while competing in Poland suddenly veered right in the final stretch sprint to the finish line – a veer that ended up forcing Jakobsen to crash full-on into barriers positioned next to the side of the road.

Since Groenewegen will only be permitted to compete again after May 7, the champion cyclist will not be competing in any of the one-day classic races this spring. The ruling was earlier this week handed down by the International Cycling Union’s disciplinary panel.

Groenewegen shortly after the handing down of the ruling issued a statement via his Jumbo Visma team, expressing his regret over the incident he says will for the remainder of his career be regarded a “black page” tarnishing his success. He also expressed the hope that his mistake would be regarded a “wise” lesson to be heeded by all professional sprinters – adding that he now daily follows any news regarding his fellow cyclist’s recovery while hoping for a complete return to professional racing.

Jakobsen, who competed for team Deceuninck-Quick-Step, was immediately after the incident airlifted to a nearby hospital before being put into an induced coma. He was awarded the stage win following Groenewegen’s disqualification from the competition.