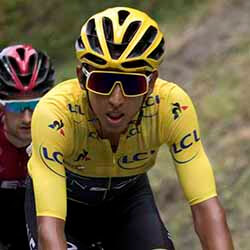 Egan Bernal has won the Tour de France and set a record s the youngest rider in 110 years to claim victory for the event after Caleb Ewan won the traditional sprint finish in Paris. The race leader remained unchallenged for the final stage of the race, 22-year-old Bernal became the first ever winner from Colombia. He crossed the line in the peloton along with Ineos teammate and winner from last year Geraint Thomas who came in second place.

Talking about the win, Welshman Thomas stated that to finish second behind a fellow team mate makes it okay, and that two years ago he had had is arm in a sling with a broken collarbone watching Chris Froome win, and wishing that he had been riding then. He added that it does show how expectations and time have moved on, and that Egan is the future of the sport, and when Thomas is 45 and old watching from with the 10th Tour de France, he can say that he knows him.

Thomas entered the three-week race as the joint leader with Bernal, but the preparations had been disrupted after he crashed while travelling at 50 miles per hour in the Tour de Suisse earlier this year in June. He was forced to abandon the weeklong race, and then had another three smaller crashes during this year’s Tour. Thomas led Bernal for much of the race, until the final week in the Alps.