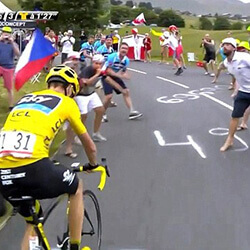 A section of the audience that were part of the Tour de France time-trial booed Chris Froome, who has been stuck in controversy lately. The day in question saw Froome’s team, Team Sky, losing the edge to BMC by four seconds, after which race leaders were handed out yellow jerseys to wear for more of the events to be held at the international event.

Next after Team Sky and BMC was Quick Step who came in third, with the Belgium team coming in seven seconds later. Fernando Gaviria failed to earn his race leader yellow jersey after dropping out along the route during the time-trial. The jersey went instead to Olympic racer and BMC leader Gred van Avermaet.

Avermaet later told reporters that earning the jersey was a great feeling, and that it was a boost for the team. He explained that it also have him the chance to win at the Roubaix, which would be taking place at a later stage. The news also came at a time when Belgium was set to play at the FIFA World Cup’s semi-finals, making the occasion that much more momentous.

Despite the boos that he received, Froome stated that he was satisfied with his results, and him and his team made good time after the seconds that they lost at the first stage of the Tour de France and will be riding again soon. Froome only lost a total of four seconds to Richie Porte, but gained five seconds over Adam Yates.