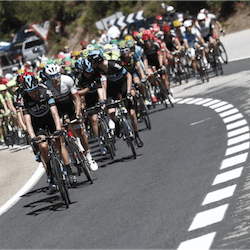 All Sights Are Set  on the Vuelta a Espana

Saturday will see the start of the final Grand Tour of the year – and Team Sky’s Chris Froome has his sights firmly set on a win.  The 2017 Tour de France winner is aiming for the pages of history, hoping to become only the third rider ever to complete a Tour/Vuelta double.

The four times Tour de France title holder seemed optimistic ahead of this year’s Vuelta a Espana, saying that this year’s Vuelta team would be the strongest squad by far going into any Grand Tour.  In the event that Froome does manage to pull off a Vuelta victory, it will be the first time that a Tour/Vuelta double whammy has been achieved since 1995 – the year that saw the Vuelta a Espana being moved to become the annual final Grand Tour of the cycling season.

Having no fairy-tale ideas about the strenuous nature of the challenge before him,  Froome was quoted as saying to the press that Vuelta was nothing short of brutal, with temperatures known to rise into the mid 40’s.  The terrain was also a lot more unforgiving than that of the Tour de France – mountainous and constantly calling for highly technical riding and absolute focus.

Froome may be the race favourite to win this year’s Vuelta a Espana, but Italian rider Vincenzo Nibali will be looking to stop the Brit in his tracks.  Having secured a podium finish in this year’s Giro d’Italia and sitting out on the 2017 Tour de France in order to rest ahead of Vuelta, Nibali poses real and imminent danger to Froome’s plans to make history.

Describing Team Sky as a very talented group of young riders, Sir Dave Brailsford has said that he views this year’s Vuelta a Espana as a defining moment for Team Sky and Chris Froome – and it seems as if he might be right on the money in more ways than one.

Froome certainly seemed up to the challenge that is Vuelta, saying that he had some unfinished business to attend to.  He will be joined and supported in his endeavours by team mates Wout Poels, Mikel Nieve, Diego Rosa, David Lopez, Gianni Moscon, Salvatore Puccio, Ian Stannard and Christian Knees.

Meanwhile, team BMC has announced that it will be heading into Vuelta without a clear GC leader.  BMC rider Tejay van Garderen describes Vuelta as being a tough course with numerous uphill finishes – lending itself especially to an explosive style of racing.

Whether BMC will be able to pull off a stunt of this magnitude – sans GC leader – will have to be seen.