George Bennett To Start in Vuelta a Espana 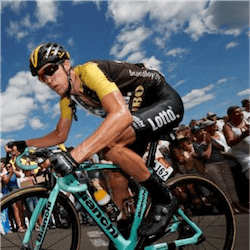 Kiwi Rider George Bennett To Start In 2017 Vuelta a Espana

Bennett performed exceptionally well at this year’s Tour, only to be set back and eventually out by a severe cold.  Had it not been for the sudden onslaught by illness, the Kiwi would most probably have been in the running for a Top 10 finish.  May the Vuelta a Espana bring better things than this year’s Tour de France.

Despite having crashed out of pro-cycling in a less than fortunate way on the back of admitting to having used performance enhancing drugs in order to secure his 7 Tour de France titles, Armstrong remains well in the know and has cited George Bennett as being a likely favourite for a future Tour win.

After a disappointing exit from this year’s tour, the Kiwi will be facing the Vuelta a Espana with a renewed measure of resolve.

The official route of this year’s Vuelta a Espana has been confirmed, and will involve no less than eight summit finishes.  Departing from Nimes in France and heading for the final destination in Madrid Spain, the Vuelta a Espana spans over three different countries – France, Andorra Spain.

Chris Froome, winner of the 2017 Tour de France, will not be relaxing after his Grand Tour victory, but has set his sights firmly on bagging this year’s Vuelta a Espana as well.  This will set him firmly in the running of winning two Grand Tours in a single season – a feat last accomplished by Alberto Contador back in 2008.

Froome has followed an interesting approach during this year’s cycling season – peaking at the back end of things in order to carry his abilities and top form forward and into the next great race.  This has certainly proved successful during the 2017 Tour de France.

George Bennett will be competing for New Zealand, with Adam Hansen putting it to the pedals for Australia.