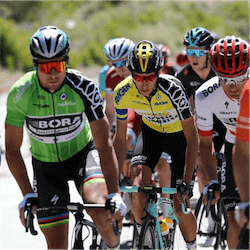 Kiwi George Bennett has been forced to abandon his hope of becoming the overall best placed New Zealander yet in the history of the Tour de France, by having to withdraw during the 16th Stage on Tuesday due to illness.   Bennett described the disappointment of having to withdraw as being gutted beyond belief, and not something any cyclist is ever up for easily – especially not a withdrawal from the Tour de France.

Bennett described having been in pain in places that he did not know existed and suffered from chills and a high fever for most of the rest day preceding the 16th Stage.  Unable to eat or drink, the Kiwi suspected that his 2017 Tour’s number was up.  Yet the Kiwi remained hopeful – and tried to ingest as much sustenance and energy as possible, even going as far as having his dinner from a blender.

Upon waking on the 16th Stage race day, Bennett was relieved to find that the fever that he had been experiencing during the rest day had gone away.  The first climb, however, turned out to be a battle and the Kiwi soon realised that he was fighting at the losing end of it.

A devastated and dumbstruck Bennett described the penny as having finally dropped when the realisation hit home that he – one of the best climbers out there – could not keep up with the hind wheel of a sprinter going up a hill.

Fury At Poor Show Of Sportsmanship

Stage 16 also made for a bit of turmoil for Australian rider Michael Matthews.  German rider John Degelkolb accused Matthews of pushing him dangerously close to the barriers and veering towards him as the two went head to head during the final sprint for the finish line.  Matthews responded by saying that Degelkolb acted in poor sportsmanship, even going as far as grabbing Matthews violently by the neck at the end of the stage.

The 16th Stage win is the Aussie’s second stage win during this year’s Tour.

Marcel Kittel managed to retain the points lead, despite having been bashed about by gale force winds  – trumping Matthews in the points department by a lead of 29 points.

Meanwhile race leader and British rider Chris Froome finished the 16th Stage of the 2017 Tour de France with an 18 second lead over Fabio Aru, and 23 seconds ahead of Romain Bardet.