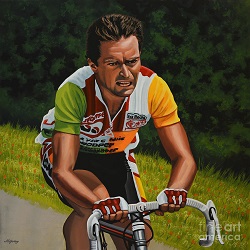 Bernard Hinault, five-time winner of the Tour de France, has been called out by riders at this year’s event, saying that his accusation of Christ Froome as a cheater along with the call for a strike, is ‘uneducated.’

It was recently discovered that Froome was found with double the legal amount of Salbutamol in his system, a drug that is associated with asthma problems, during his time at Vuelta s Espana, which Froome won. He then went on to win the Giro d’Italia, and became the first man to win all three Grand Tours at once since Hinault’s wins in 1983. Froome has fought back against the accusations, saying that he has not broken any rules, while Hinault believes that Froome is a cheat.

Team Sky would go on to make a statement about the 63 year old rider, accusing him of distorting the facts, and that it wasn’t the first time that he’d done it. The statement explained that they were disappointed that Hinault has once again spoken out in a case that he doesn’t understand, and has stated incorrect facts. They also went on to add that Hinault was irresponsible and ill informed, and that he needs to appreciate that every rider is entitled to fairness.

This comes after news that Froome has been at ends with the International Cycling Union over Salbutamol findings. The team is looking to look further into the doping accusations and find resolution for those involved.