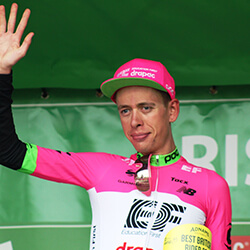 24-year-old British rider Hugh Carthy spent most of his 101.5km stage riding solo and finished with over a minute clear. Team Ineos Egan Bernal took the win for the overall race as he topped the standings by 19 seconds from Rohan Dennis. Colombian Bernal said that he would bring a lot of confidence into the Tour de France next month. He has become the second favourite for the Tour behind teammate and defending champion Geraint Thomas.

With Chris Froome currently recovering from his recent accident, Thomas is expected to be the main focus of Team Ineos, but Bernal’s latest win proves that he will provide plenty of backup for Thomas during the Tour should he make any mistakes. The Colombian rider showed his comfort riding in the mountains by sticking close to Bahrain-Meridia competitor Dennis launched his own assault with 25km still left to go.

The Australian was trying his best to make the time back and take the win, but there was no point during the race where Bernal look like he would lose any of his hard-earned mileage up the mountain.

Dennis finished in second place for the stage and Bernal followed him with third place while Carthy enjoyed a solo procession to the end of the race for his EF education First Team. The rider, born in Preston, opened the gap of three minutes on the peloton, and eventually crossed over the line one minute and two seconds clear.