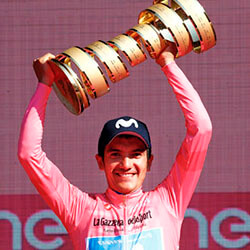 Richard Carapaz, rider for Movistar, has become the first Ecuadorian to win the Giro d’Italia after the rider managed to finish the event, a time trial that took place in Verona. Going in with a lead of almost two minutes, 26-year-old Carapaz started the 17km stage comfortably holding off most of his biggest challengers. American Chad Haga claimed first place for the stage, while Primoz Roglic took the podium from Mikel Landa just behind Vincenzo Nibali.

British Simon Yates ended the event in eighth place overall. After the final stage of the 2018 processional in Rome, the time trial that took place in Verona was designed to be the 2019 edition of the event. Despite this, Carapaz, who was fourth for his Giro debut last year, proved unstoppable for his technical Torricelle circuit that was used in both the 2004 and 1999 World Championships. And although the rider finished 49 seconds behind Nibali and an entire minute behind Haga, the Ecuadorian rider finished the race as the second South American of all time to win the Giro.

Colombian Nairo Quintana, fellow Movistar teammate, was the first in 2014, but did not compete in Italy this year. Talking about his win, Carapaz stated that it as the biggest moment of his sporting life and that he was having trouble describing it, and that he had suffered from the start to the finish until he had reached the arena in Verona.