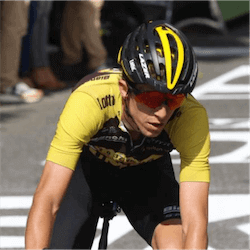 The Jumble Of Emotions That Is George Bennett

Stage 13 of the 2017 Tour de France was nothing short of an emotional rollercoaster – or should we say montagne russe émotionnelle – for Kiwi pro-cyclist George Bennett.  The day initially kicked off on a positive note when cycling’s judiciary body overturned the decision taken earlier by race officials to punish Bennett by imposing a 20 second penalty as a result of his acceptance of a drinking bottle from road-side fans, during Stage 12.

Despite the good news and bright start to the 13th Stage, Bennett just could not seem to get his cycling legs on – falling far behind the race leaders during the last stretch of the 101km journey.  Bennett ended up losing his rank among the Top 10 – having fallen into 11th place by the end of the stage, as a result of his poor performance.

Despite the setback, Bennett should not have had to face too much of an uphill battle to reclaim his spot in 10th position – with esteemed Spaniard Alberto Contador finishing the stage only about a minute ahead of the Kiwi from Nelson.  And yet, this is not how it played out during Stages 14 and 15 – with the Kiwi now having fallen into 12th position overall.

If Bennett were to recover and regain 10th position – it will be the very first Top 10 Tour de France finish for New Zealand – certainly a goal worth giving it your all for.  Bennett being a mere 30 seconds behind the rider currently in 10th position, the Kiwi remains optimistic.

A tad troublesome is the fact that Bennett seems to have picked up a cold during Stage 15.  The Kiwi seemed positive and of the opinion that he would manage to shake the bug during the second rest day on Tour.

Team Sky leader Chris Froome did not experience Stage 15 as being a day in the park either, having battled and survived a broken spoke at the foot of a very crucial climb on the Massif Central leg of the Tour.  Despite the nerve-wrecking set-back, Froome managed to hold on to the lead, most probably thanks to the selfless act by team-member Michal Kwiatkowski of giving up his own back wheel in order to restore Froome’s hold on the yellow.

In a show of tremendous sportsmanship and team support, Kwiatkowski surrendered his back wheel to Froome when it became apparent that the team’s support car was lagging too far behind.