Vuelta To Be Alberto Contador’s Last 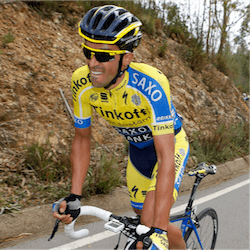 We all want to quit while we’re ahead.  And so does Spanish pro-cyclist Alberto Contador.  Hence his having hung in there for another season after he initially decided to quit back in 2016.  One of only six riders to have won all three Grand Tours, the 34 year old announced on Instagram on Monday that the Vuelta a Espana would officially be the last race of his professional career.

Alberto Contador not only won all three Grand Tours, but achieved the daunting and magnificent feat as the youngest rider ever to do so – before the age of 25.  The Spaniard is also one of only two riders to have won the Giro d’Italia, Tour de France and Vuelta a Espana two or more times each.

Escaping The Dirty Pool Of Controversy

Contador’s entire early career – for the most part – is shrouded in controversy on the back of the Lance Armstrong doping era, he himself having been banned from pro-cycling for 2 years after traces of steroids were found in his urine during a random test.  The Spaniard never contested the 2012 finding – saying instead that the dope must have originated from contaminated beef.

The Court of Arbitration for Sport concurred that the doping could possibly have originated from a contaminated food supplement – but stuck to their guns and banned the Spaniard nonetheless, on the off-chance that he had doped intentionally.  The idea was that the only way to rid cycling – or any professional competitive sport – from doping for good, was to hold an athlete responsible for whatever was in his or her system, irrespective of the intent.

Contador’s ties with two of cycling’s most notorious doping agents, Manolo Saiz and Johan Bruyneel, did not aid the Spaniard’s cause.

After many a victory having already been shadowed by controversy and full-on doubt, the drama peaked in 2011, when Contador arrived at the team presentation ahead of that year’s Tour de France, to be met by a unified chorus of boos from the crowds.  He accepted the hostile reception with dignity and did the same when the news broke that he would be facing a 24 month ban.  The rider seemed intent to come back stronger than ever after the prolonged absence – going on to win Giro and a pair of Vueltas upon his return to pro-cycling.

So then ends yet another era – and we hope, the last of the mire of the time of doping, along with it.