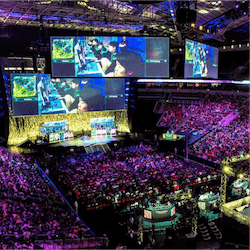 Invictus Gaming Takes The Western Bull By Its Horns

The Chinese teams have shown why they do the very positive stereotype of being brilliant masterminds proud, on the 1st day of Dota 2 – The International 2017.  Legendary Chinese team Invictus Gaming went first up against EU-based Team Liquid – a Western team regarded by many as the tournament favourite.  Invictus Gaming’s success is all but new found; with the squad having won the Aegis of Champions back in 2012 – although with a different make-up of team members.

Last week’s group stages did not quite predict this particular outcome – with Liquid having won 13 out of their 16 games, and Invictus Gaming managing a slightly less impressive 10 – 6 score, in their favour.

Invictus Gaming player Ye “BoBoKa” Zhibiao proved to be the man of the hour, playing with aggressive efficacy right from the onset.  BoBoKa’s style secured an early lead for the Chinese team – and one that intimately proved insurmountable.

Team Liquid did not take the thrashing lying down – hitting back every bit as aggressively at their opponents during the second round.  Despite the valiant effort and being egged on by the recovery, the Western team simply could not hold the momentum – eventually grading down and out to a lower bracket during Round 3.

Set two saw a stand-off between two previous Dota 2 International winners – with T15 champs Evil Geniuses going up against Chinese T14 champs team Newbee.  Newbee took the set 2 – 0, after a number of key mistakes on the part of their Western opponents.

End Of Action For Dota 2 Day 1

Day 1 drew to a close as T16 runners up Digital Chaos went up against yet another team of Chinese champions – Team IG-Vitality.  Both teams underperformed despite having been predicted as strong contenders for T17.  In the end Team IG-Vitality, a spin-off from the original Invictus Gaming brand, was eliminated.

What To Expect On Day 2

Day 2 of The International 2017 will witness more upper bracket competition – with Filipino team TNC Pro Team taking on the very dominant Chinese LGD.Forever Young.  LGD.Forever Young has only lost a total of two games in the group stages.

The lower bracket games taking place on the second half of Day 2 will see Team Liquid pitted against the moves of Team Secret as well as Evil Geniuses playing team Empire.

Lower bracket losers will be eliminated from the 2017 tournament at the close of Day 2.