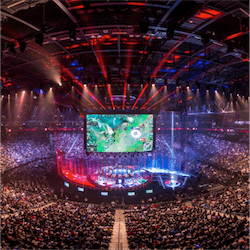 It has been over a month’s worth of blood and sweat and unforgiving competition and now, finally, only two teams remain to battle it out for the ultimate honour: League of Legends World Champions 2017.

The finals will be played on 4 November at the iconic Bird’s Nest Arena in Beijing and will, quite ironically, be battled out between two of last year’s finalists, SK Telecom T1 and Samsung Galaxy.  Last year the competition was every bit as tight and gruelling as this year, with SK Telecom T1 having had to battle a nerve-wrecking test against Misfits Gaming.  Shortly after it was China’s Royal Never Give Up who pushed the dominating team to the edge.  Their true poise and performance under pressure was on full display during those two events and we can expect more of the same come the finals.

Samsung Galaxy, on the other hand, absolutely flew through the knockout stages last year, having entered into the quarterfinals against Longzhu gaming as the absolute underdogs, but emerging on the other side of the fight having secured a very decisive 3-0 victory.

Samsung Galaxy is well known for their supreme map control and overall strategy.

European teams really stepped up in a big way in 2017.  The question begs, will it have been enough in time for the grand finals kicking off on 3 November?  The world’s best teams will be battling it out at Blizzcon and will be competing for 1 Million USD in prize money.

For the first time ever, Europe has a viable and even probable chance of beating Korea.  In order to understand why, it’s important to travel back in time to the mid-year brawl that was played in Sweden, when Fnatic and Team Dignitas went head to head in the grand finals of the very first HGC international event.

The third European man in is Team Expert.  They have drawn a lot of attention lately and all eyes are on them for the November 3rd Grand Finals, especially as both of their EU counterparts have already proven their stuff against Korean teams during this year.

Team Expert will really have to show their stuff and come to the table with it though, what with them having to beat L5, SPT and Soul Torturers just to escape their designated group.  Assuming that they do this, they will then have to trump seven more teams in the grand finals.